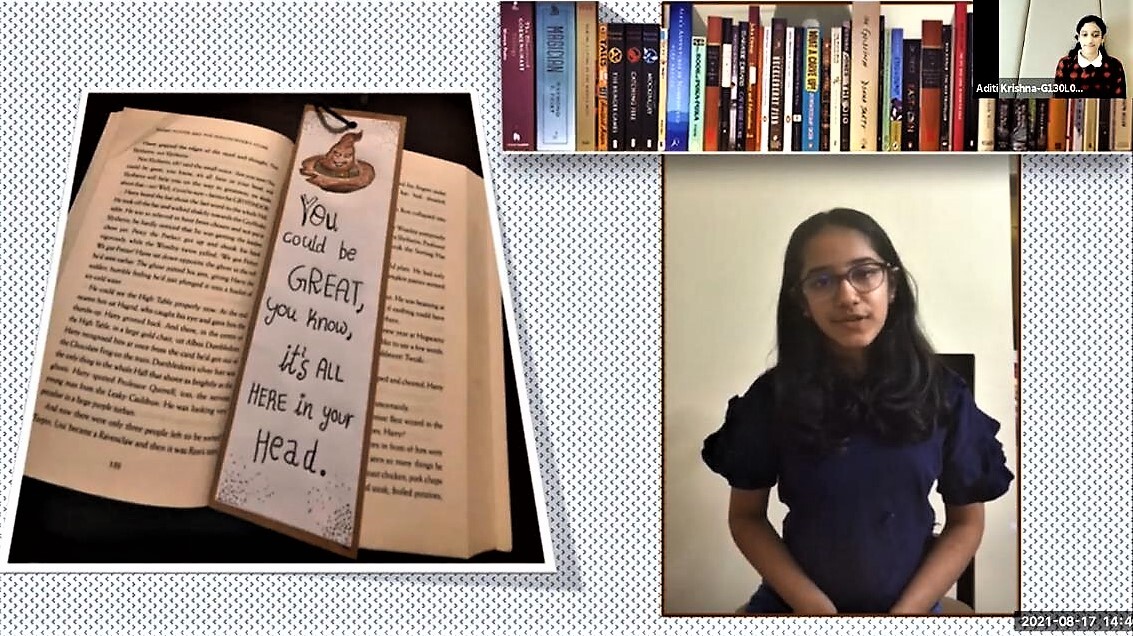 “Books are a uniquely portable magic.” – Stephen King
With these words in mind, the students of Class 7, The Brigade School @ Malleswaram organized Fantasia, their English Literary Activity. It was an online program held on 17th August 2021. The students planned all the activities around books from the Harry Potter and the Percy Jackson series.
The program commenced with the Welcome Speech by Saatvik B. K. He welcomed all the dignitaries, the teachers, and the students. There were more than one hundred and twenty-five participants waiting eagerly to be taken into the world of Harry Potter and Percy Jackson.
After the welcome Speech, Saatvik B. K. handed over the microphone to Aditi Krishna, one of the two comperes for the event. Aditi Krishna started by telling the audience that while books should not be judged by their cover, an interesting book cover tempts the reader to pick up that book. She took the audience through video recordings by students talking about the book covers, the bookmarks, and the story wheels created by them. Aditya Vikram Rao shared his book cover based on the book, “Harry Potter and the Prisoner of Azkaban”. Nidhi B. K. spoke about her favorite quote, “Always” from the book, “Harry Potter and the Deathly Hallows”.
A bookmark is not just a marker for finding a place in a book. Swadha N Mandyam spoke about how bookmarks can be created from fabric, paper, or waste materials. Bookmarks can be unique and she showed the audience her special Harry Potter bookmark. Pranav Chauhan displayed his story wheel and spoke about the various aspects of his story wheel. He emphasized that the characters, the setting, the plot, the problem, and the solution are vital to make the story come alive in the readers’ imagination. The musicians of The Brigade School enthralled the audience with a rendition of the song, “Home”.
The next segment was the role-play presented by seven students. The audience was shown videos depicting characters from the Harry Potter & the Percy Jackson series. Members of the audience had to guess the name of each character. Students essayed the roles of Dolores Umbridge, Thalia Grace, Luke Castellan, Bellatrix Lestrange, Hagrid, Annabeth Chase, and Nico de Angelo. The audience participated enthusiastically and was able to guess the name of the character every single time.
After the role-play, Sahana Anand took over as the compere. She reminded the audience that Fantasia was all about books and their magical charm. She reiterated the fact that books can weave a spell over the readers and inspire the readers to bring forth the power within them. She then introduced the next segment of the event, “Weave a Story”. For this event, sixteen students were grouped into four teams. All the team members were shown a group of pictures and they had to create a story using the pictures within the stipulated time. All the groups presented their stories when requested to do so. The students kept in mind the elements of a story while creating their own. They also ensured that they did not deviate from the magical theme of the event.
The program next showcased the artwork created by the students. Bookmarks, book covers, invitation cards, and story wheels were displayed. The audience also read and appreciated the poem written by Pranav Sandeep.
The next item in the order of events was the cookery show by Brinda V. She created a power-packed drink called Magical Twist for the audience. Akanksha Parikh proposed the Vote of Thanks on behalf of all the students of Class 7. She encouraged the audience to keep reading and enjoying the magical power of books.